13th World Scout Jamboree – Asagiri Heights, Japan, 1971. Set in the foothills of Mount Fuji, the 13th World Scout Jamboree will be considered by many to have been aptly numbered, for it attracted an unwelcome visitor in the shape of Typhoon Oliver!The 20,000 Scouts, including 437 Scouts and Venture Scouts and 49 adult Leaders from the UK, found themselves amidst a sea of black mud and buffeted by high winds for close on three days. Conditioned previously by camping in “typical British summer weather”, many of the UK Scouts were able to last out the trying conditions and help their less fortunate neighbours in the waterlogged 800 acre camp site.Despite the typhoon, the Scouts managed to carry out many of the planned activities including a World Scout Forum, expeditions up Mount Fuji and an International Evening with displays of national skills, dancing and song. Scouts Ken Powell and Eric Munn attended from Summerland. 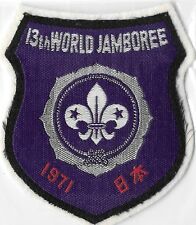