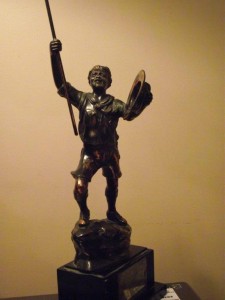 The Scouting movement began in England. It started in the mind of Lord Robert Baden-Powell of Gilwell. During 1907 and 1908, he was working on a book which incorporated many of the things that he had learned in the army, ideas which he felt would be adaptable to programming for boys. In 1907 he ran a trial camp at Brownsea Island to test many of the principles of his program for boys. This resulted in publication of his book “Scouting for Boys” in 1908.
In 1910, the Boy Scouts Association was established in the United Kingdom to oversee the development and growth of the program. On June 12, 1914, “The Canadian General Council of the Boy Scouts Association” was created by an Act of Parliament. Scouting had officially arrived in Canada. The Canadian Council continued to be represented internationally by the Boy Scouts Association of the United Kingdom until October 30, 1946, when it became a direct member of the “Boy Scout World Conference” (now known as “World Organization of the Scout Movement”).

The Canadian Council changed its name to “Boy Scouts of Canada”, and subsequently to “Scouts Canada” in 2007.

Prior to the official arrival of Scouting in Canada in 1914, there were many areas where clubs and other organizations for boys sprang up which generally followed the principles laid out in “Scouting for Boys”.

The first such organization in the South Okanagan appears to have been in Summerland. The “Summerland Boy Scout Association” came into existence in 1909. It existed as a lone entity in the beginning, but later evolved into the 1st Summerland Scout Group. Cliff Borton was the first Scoutmaster of the new troop. The Summerland Museum and Archive has some excellent documentation on this early era.

The second group to emerge was likely “The Penticton Troop of Boy Scouts” which is first evidenced by a logbook of Minutes of Meetings (archived at the Penticton Museum). The date was October 11, 1911. A Mrs. Hector McNeil is mentioned often as being the driving force behind the Scouting and Guiding movements in Penticton at this time. Through her, there is a possible connection with a Penticton Boys Club which has been touted as being started as early as 1907. After the Boy Scouts Association was established in England, but before 1914, the Penticton group was recognized as Boy Scouts, the earliest documentation being the aforementioned 1911. An article by Reg Atkinson in the Okanagan Historical Society Annual Report mentions a Harry Pitman as the first Scoutmaster. This might work, because the first reference in the minutes of meetings does not name a Scoutmaster (Charles Edwards) until 1913. There is a brief reference in the Penticton Scout minutes of meetings about getting together, on April 16, 1915, with the “Naramata Boy Scouts” for a game somewhat like our modern Capture the Flag. According to a letter on file at the Penticton Museum, a Mr. Frank Hughes recalled being a youth member of the Naramata Scouts around 1911. This year cannot be confirmed. Hughes shows up as the Scoutmaster of the Penticton Group in 1931.

Early newspaper articles also talk about Scout troops in the Hedley and Keremeos areas (1914 to 1917), so we know they existed a very long time ago, but we do not know what happened to them in the intervening decades.
It is unclear as to what year a Scouting District was first formed, but the intial Okanagan South District included Summerland, Penticton, Naramata, Kaledan, Keremeos and Cawston. Some evidence points to 1939 as the year for forming “Boy Scout Associations”, with a group of parents and/or sponsors providing organizational support for the Leaders and the groups.
In the early history area, I have included a brief mention of some Scouting groups in wht we call the “Boundary” country, specifically Greenwood and Phoenix. I believe Boundary country and Kubau District had some overlap, so it is included for the sake of interest. These groups have been traced as far back as 1910.

In 1971 or 1972 the District boundaries were extended to include Hedley and Princeton. And in 1973, the Kubau District was officially merged with Okanagan South, which brought the rich history of Scouting in Oliver and Osoyoos into the mix.
For the sake of this historical timeline, all groups will be included whether or not they were officially a part of the District at the time of their documented existence.
Note that there will be ongoing discepancies over specific dates of many things. For the sake of the Scouting Program, a year was generally viewed as starting in September and concluding in June the next calendar year, with some summer activities added on for many groups. When we have found reference to someone as being involved in 1971, for example, are we talking about the latter half of the 1970-71 Scouting season? or the early half of the 1971-72 Scouting season?
While this may appear to be a record of dates, events and organizations, it is really a story about the people of our communities. As you absorb this history, and perhaps dig deeper on your own, you will notice names, names that show up over and over. The names of the leaders in our communities.

Names, for example, like James Brown Laidlaw (“Jim” to most Scouters). He started as a Wolf Cub in the Penticton Troop of Boy Scouts in 1917 (or possibly 1915). He grew up in Scouting, attaining King’s Scout status in 1923. Then he went on to a lengthy career as an adult volunteer in Scouting, as a section Leader, group committee member and chair, as well as extensive work at the District and international levels. . He served the youth of his community for 55 years as a volunteer.

One thought on “Welcome”