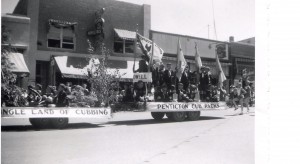 The 3rd Canadian Jamboree was held in 1961 in Connaught Ranges near Ottawa, Ontario. 2095 Scouts were in attendance. Ron Dean and Chris Hatfield attended from 1st Penticton with Fred Trussell from 1st Summerland. Unknown Scouts from Oliver also attended.