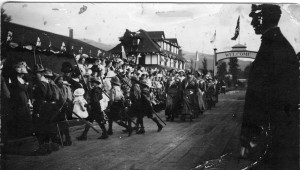 With thanks to Penticton Museum and Archives. These photos are the property of the Museum, part of their growing collection of area Scouting memorabilia. I believe the date to be October 4, 1912. The Duke of Connaught, Governor-General of Canada (also the Chief Scout of Canada) was on a tour of British Columbia. He was scheduled to arrive in Penticton at about 4PM and stay overnight for a gala event. Judging by the shadows, these would be late afternoon shots, and the Duke is likely arriving aboard the sternwheeler S.S. Okanagan behind the photographer.
The Scouts are from the “Penticton Troop of Boy Scouts”. Look carefully at the second photo. I am guessing, but the gentleman standing in front of the Scouts is likely the Scoutmaster, Charles Edwards. Scouter Edwards was a recent arrival to Canada, having come from England, where he had been commissioned as a Scoutmaster. Three young men received their King Scout badges amid this pomp and ceremony, directly from the hands of the Duke. They were “Patrol Leader C. Thompson, Second Scout R. Bird and Bugler F. McDonald.” Guessing further, I see two young men holding bugles. Might one of them be Frank Oscar McDonald? While the King Scout badge, the ultimate symbol of achievement in Scouting, was in play since 1909, Scouting was not officially chartered in Canada until mid-July, 1912. These three young men can lay claim to being among the first official King Scouts in Canada.