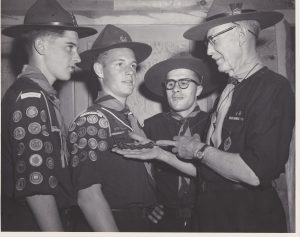 Mitchell began his long and storied association with Scouting as a youth member of a Boy Scout Troop in Saskatchewan in 1909. The family moved to Oliver in 1922, and 11 years later he was asked to help with the new Scout Troop in Oliver, eventually becoming Scoutmaster, and remaining in this position until 1939.

In 1939 Mitchell took on the role of District Commissioner, assisting and guiding other adults as they learned to become Cubmasters and Scoutmasters. His territory was large, bordered by Penticton, Princeton and Osoyoos, and it stayed like this until 1945 when it was split into two Districts; Okanagan South and Okanagan Boundary, the latter being where Mitchell continued as District Commissioner. By 1951, he had immersed himself in Scouting’s Gilwell Training program for adult volunteers. Here he stayed for many years, taking courses himself and acting as Chief and Assistant Chief at numerous other Gilwell Woodbadge courses for volunteers.

During these active years as a training instructor and coordinator, Mitchell continued his role as District Commissioner of Okanagan Boundary. Not done yet, he worked closely with Frank McDonald and others on proposing a significant change in how Scouting was structured in British Columbia. The result was the creation of Okanagan South Region, making expertise available to volunteers in a more timely and local fashion. All existing Scouting Districts in the Interior maintained their autonomy, but now had access to guidance within the Region. It is no surprise that Mitchell volunteered to be the first Regional Commissioner, reaching out to District Commissioners to enhance the Scouting programs being offered to youths. After two years in this position, he stepped back to the role of Trainer, in which he continued for many more years.

Perhaps while not as prominent at this time, Mitchell continued to recruit good adult volunteers for Scouting. Starting in the 1930s when he had recruited the late Carleton MacNaughton, he firmly believed that Scouting best served the youth of the area when it had high quality, well trained adults at every level.

In the course of his stellar years of volunteerism in the Scouting organization, Mitchell was honoured many times. Keep in mind that this was in addition to his time spent with family, other community organizations and his 41 years as Stipendiary Magistrate in the County of Yale. Scouting presented him with the Long Service Medal (eventually with three bars for extra years), the Medal of Merit, and the Silver Acorn (the highest honour in Scouting).

While much of the documentation from Mitchell’s first three decades in Scouting has not been rediscovered yet because of the changing District and Regional structure, sufficient archives exist such that he is recognized as one the most significant volunteers in Scouting in British Columbia over his fifty years of association with the organization.