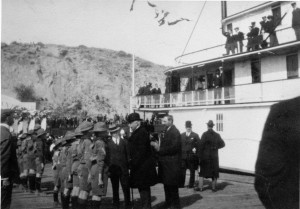 ( Courtesy of Summerland Museum Archives. Governor-General for Canada, the Duke of Cavendish, Chief Scout for Canada, visits the South Okanagan on October 19 and 20, 1919. The Scout standing slightly out of line, behind the G-G, has been identified as Gordon Blewitt of 1st Summerland Troop. Blewitt received his King’s Scout award 2 years later, and returned many years later to be a Scoutmaster. It is not clear as to whether this picture was taken on the waterfront of Summerland or Penticton )