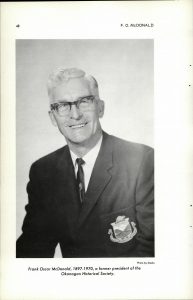 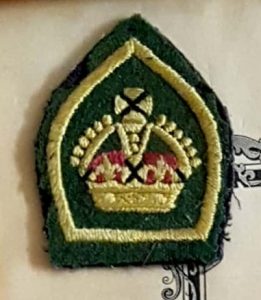 Penticton’s first King’s Scout (1912) and a member of Penticton’s first Boy Scout Troop when it began in 1910. After his service in the Royal Flying Corps in World War I, he returned to Oliver and eventually Penticton, establishing a lifetime of service to his community through business, community service groups and local politics……and the Boy Scout movement (50 years of the latter, to be precise).

Born in 1897 in Armstrong, moved to Penticton when he was 11 years old. His Father, Joe, was a master builder and craftsman. Taught school in Penticton for 2 years, then enlisted with the 172nd Battalion Rocky Mountain Rangers in WW1, transferred to the 2nd Canadian Mounted Rifles, and and then joined the Royal Flying Corps, serving in France. Upon discharge returned to New Westminster, and then back to Penticton in 1920 to help his Father build the CPR dock on Skaha Lake. After other jobs, he bought an orchard in Winfield and soon became Manager of the Winfield Co-op Packing House. Back to Penticton in 1934 to be Manager of Pyramid Co-op Packing House, and later of the Penticton Co-op. Moved to Oliver in 1954 to be Manager of Southern Okanagan Lands Project. Returned to Penticton in 1964 to retire to his orchard.

His contribution to Scouting was mostly at the executive level: Group Committee, Director and President of Kobau District (Okanagan Boundary), ultimately President of Interior Region. He worked tirelessly to link the interior Districts together through a Regional structure. He was honoured with a Thanks Badge and lifetime membership in the Scouting movement in Canada.